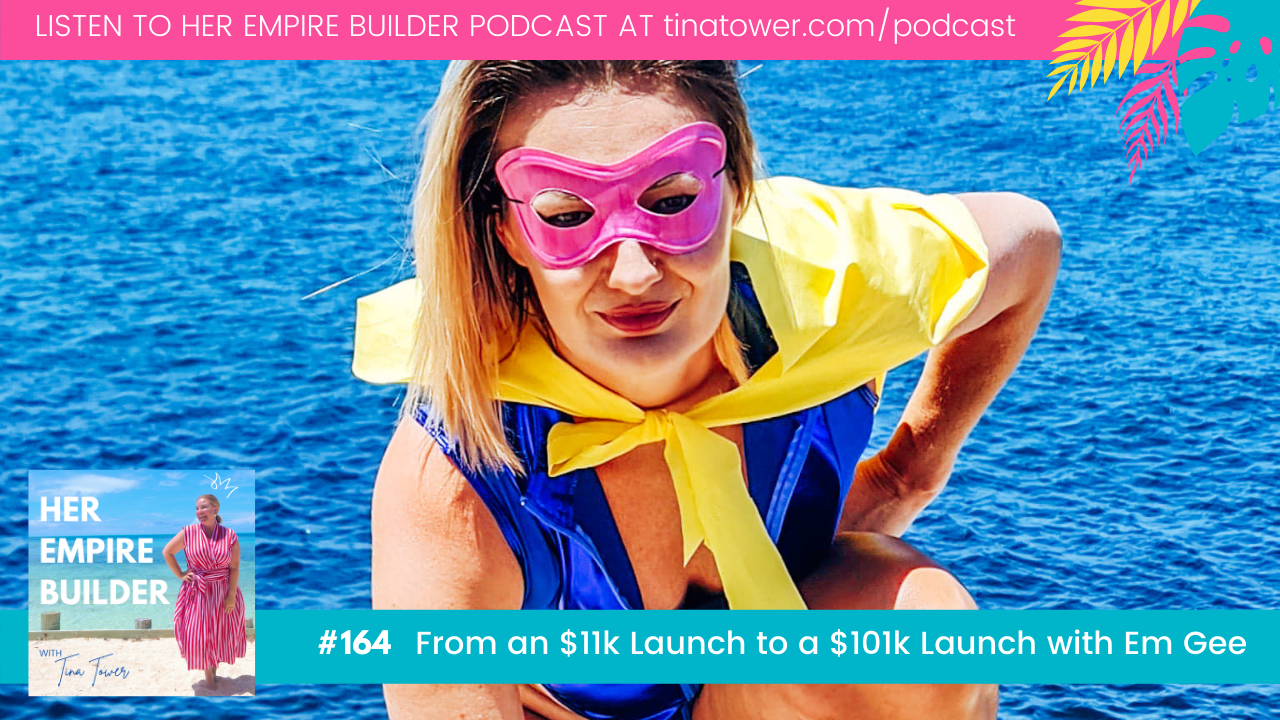 With the doors for Her Empire Builder membership opening on 5th April 2022, the timing couldn’t be better to reflect on the incredible journey of one of my beautiful members, Em Gee.

Episode #164 of the Her Empire Builder podcast features Em’s incredible success story, detailing how after first delivering a launch of $11k she applied the skills and knowledge learnt through my Her Empire Builder program to massively level up and deliver an impressive $101k launch.

So a little on Em…

After being a primary school teacher and spending her early years helping shape young people’s lives, Em stepped away from teaching when becoming a mum in search of a career that would allow her more freedom, flexibility and family time; she became a personal trainer. As she spent time helping people transform their bodies, she discovered many of her clients were actually in search of mental transformation, leading her to the career of mindset coaching. Em now works with female entrepreneurs helping them to become unstoppable, whether this be through focussing on their mindset or business strategies.

Whilst Em’s experience as an entrepreneur, passion for personal development, and all round gansta-style have been crucial to her enviable success as a coach, it’s her determination to succeed, love of connection and her willingness to reflect and learn that have enabled her to upscale her business and subsequently deliver a launch that significantly exceeds her prior results.

During the Podcast, Em shared with us how she adopted a “throw spaghetti against the wall” approach with her first launch; she was testing the waters. Her product was strong, she met and welcomed some incredible women into her program and completed a modest $11k launch. On completion of the launch, Em considered what worked, what didn’t work and what she would do differently next time….and then she found me and my Her Empire Builder program.

From that point on, Em became super strategic and managed her next launch like a boss. Dressed head to toe as a super hero, Em rolled out a launch plan involving Facebook ads complemented by organic marketing, with each stage mapped out to manage the entire process. Actively interacting with parties registering for her webinar and even those showing a general interest in her journey, Em believes the connections she made with people significantly attributed to the success of her $101k launch.

In less than five years as a solopreneur, Em Gee has become a best selling author and international business and mindset coach to women all over the world. Her unwavering belief in all women to shine as leaders in their own fields, has led her to teach “Unstoppability” as a quality waiting to be unleashed within every single business owner she works with.

We love having Em in the Her Empire Builder community and can’t wait to see what the future holds.

For the show notes of this episode, visit tinatower.com/164

If you're also looking to take a massive level up in your business, Her Empire Builder has her doors open NEXT WEEK! You can jump on the waitlist for some early bonuses at herempirebuilder.com