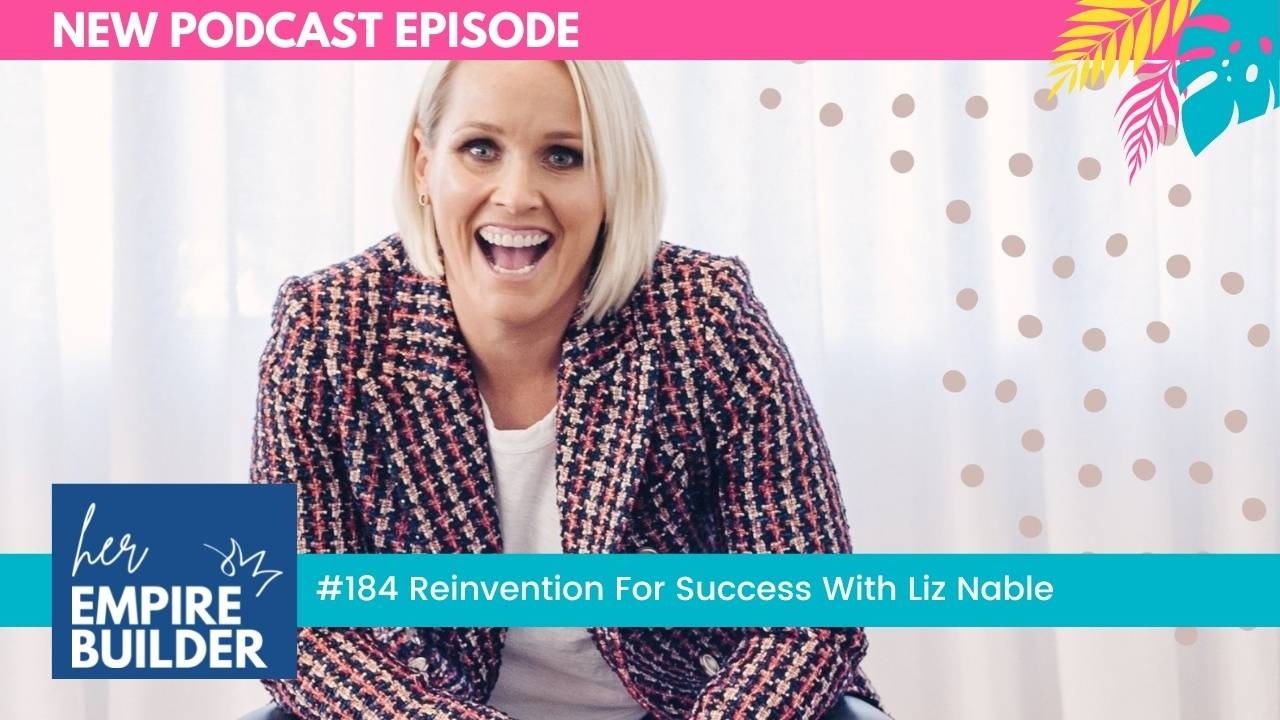 My special guest today is the fabulous Liz Nable!

Liz joined Her Empire Builder two years ago and the reason why I wanted to share her story with you is of course, because she's fabulous - but also, because having so much background and expertise in different areas, it was difficult for Liz to choose her online course path and she tried a few iterations before she got her winner.

During our time together, Liz shared that you can reinvent yourself and that the winning idea is the one that uses both your knowledge and expertise, and also aligns to what you love talking about.

Where were you in business when you made the decision to switch gears into the world of online courses?

I was a TV journalist. That was my first career when I left university, working in regional television, and then I moved to working in 24 hour news in Sydney. When my husband got a work opportunity in New York, I spent six years in New York working as a freelance journalist.

I got some amazing opportunities there to gather some really big stories in lots of different areas, so I got really good at thinking on my feet, creating something out of nothing, and learning really quickly.

When we came back to Australia I was stuck on a news desk, working really long days away from the kids and earning pretty basic money, so I started thinking, “what else can I do?”  I got really sick of waiting for someone to promote me, and I wanted to be in charge of my next move. After speaking with my husband about it, we knew that we really need to start creating a life that we want rather than just going in the direction where we happen to get taken by working for money.

How did you decide on the right idea and the right niche for your online business?

I thought initially that franchising would be easy to teach, because I know it really well.
I've been in a franchise business from its beginnings. I've watched it grow, so that's where I started. I think that was my fallback because it was safe. And then as I went along, I realised that I wasn't passionate enough about it. There was something about it that just didn't click for me to want to go and wake up every morning and do it every day.

And then I realised - “Oh my God, this PR workshop that I taught four years ago. That's a course!”

So you relaunched as a PR media coach in April this year - what’s been happening since then?

I've launched a podcast, which I absolutely love. I've done two local events in Sydney and Dubbo, and I'm doing another one in Wagga next month. I’m getting really good traction with people with speaking opportunities and have booked two keynote speaking events in October for franchises to talk about media.

And finally, I'm going to launch the course in October. I've already got a couple of pre-sales on the course from the live events and the plan is to continue to launch it twice or three times a year.

What do you wish you had known at the start of your online business journey?

I wish I'd known I was going do a media and PR course and save myself a year and a half! But aside from that, I I've always been held back a bit by thinking that's it’s got to be better before I can something. Or that I've got to be bigger before I can do it.

I just wish I'd I wish I'd had the confidence early on to just pull the trigger.

Liz’s passion for entrepreneurship and business happened by accident. Originally a TV journalist Liz spent 15 years working around the world, including six years in New York. It was while living in New York, that Liz discovered the barre workout and knew instantly this could be a huge business opportunity in Australia.

After returning to Sydney with her husband and young family in 2011, they found themselves caught in the middle of the GFC downturn and spent the next year doing long hours at a 24 hour news desk and rethinking what the future looked like. With a ton of media skills but no formal fitness or business training, Liz and her husband Adam decided on a franchise system and within six months became Australia’s first franchisees of little known fitness brand, Xtend Barre and opened their first location in Sydney.

Over the next 8 years Liz increased her investment to four locations while helping the US based brand build national awareness and get media attention around the country. There was a lot Liz had to learn about running her own business, but one thing she was already an expert in was how to get great media coverage and FREE PR to take Xtend Barre from an unknown brand in Australia to a household name.

She quickly realised that her insight into what the media wanted and her knowledge about how how to leverage those media organisations to build her business, was an invaluable asset in her incredible growth. Now Liz teaches her Media Masterclass to other SME's so they too can get inside tips and tricks about how to master the art of using publicity to drive their business growth.

In 2020 Liz was listed in the Top 100 Most Influential Women in Franchising List, she was also named 2019’s Australian Franchise Council's Woman of the Year. In 2018, she won Xtend Barre Franchisee of the Year and Business Person of the Year and her studio in Mosman won Fitness Business of the Year. Visit Liz's webiste at https://www.liznable.com/