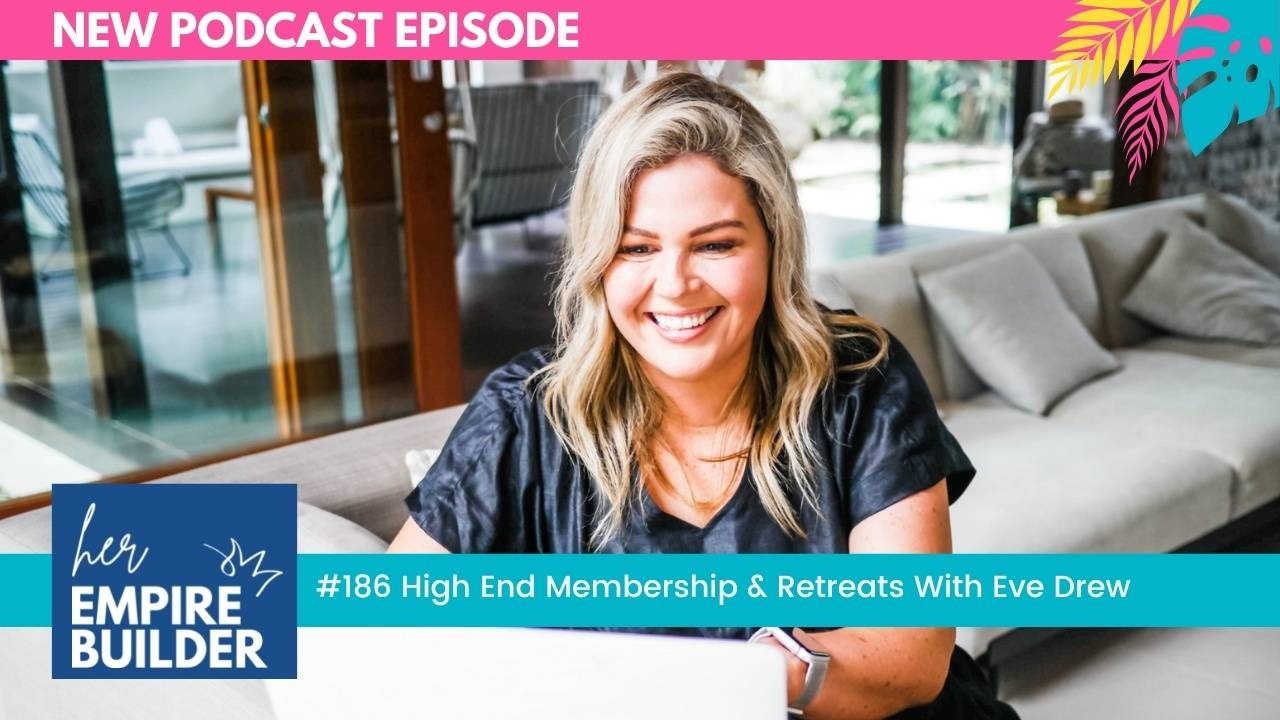 This week I had the absolute pleasure of interviewing an absolute champion of a woman. I’m talking of course about Her Empire Builder member and founder of Her Health Collective, Eve Drew.

Eve shows other women in the health industry how to build the clinic of their dreams without losing themselves in the process. Health is an industry which is largely female dominated, but that is not reflected in the relatively low numbers of female business owners and women who hold leadership positions.

Eve is on a mission to change that!

Eve, you've come from a traditional bricks and mortar business, and turned into a superstar in the world of online courses! Can you give us an update of where you're at at the moment with your online business?

The last nine months have been an absolute whirlwind. When I sold my bricks and mortar business in 2020, I knew that I wanted to help more women start and scale their health businesses. So I launched Her Health Collective last year, and really, I spent the whole year just trying to find anyone that could help me.

I invested lots of money in different things, but I didn't really have all the answers. When I joined Her Empire Builder last year, I felt like I was where I was meant to be.

I did my first launch last year, which was a $10,000 launch and since then a friend and I have also released the Be Well Retreat. We launched our first retreat, and we're offering another one in October, and our first international retreat next year which is just amazing! I’ll also be starting to podcast within the next few months as well. It's been such a big nine months!

Take me back to what made you think to take your business online in the first place.

What initially drew me to health was that I love helping people. And I love connecting with people. So I've been a podiatrist for 20 years, and through my work we had a seven figure business which I sold at the end of 2020.

I loved helping people reach their goals and supporting them to do that, so I decided to start helping other women start their practices, and then grow their businesses. And that's where the idea came from!

I figured that if I'm doing this anyway. I might as well make a business out of it.

I started pulling together everything that I had learned over 12 years of business ownership, and started to structure and systemize my business. I knew other people could really benefit from all of these learnings along the way. So I've packaged all of that up into a program and a membership where I help other women by walking them through the process tand being their biggest supporter.

I started with a six week immersion course where I worked with five women, and just walked them through that program. After that, I thought the membership was the logical next step for women, because you can't really change your business dramatically in six weeks. You can look into it and look for all the opportunities and do some really strategic planning, but there was no ability to really make massive change in six weeks.

I realised the membership was a better way to go, which is what I'm launching right now.

You've got a big heart in wanting to help people and wanting to be of service. How do you personally put boundaries in place?

That’s been such a battle for me, and for the women that I work with it's probably the biggest battle - boundaries around time and energy. There's such a need for health and there's such a shortage. I live in regional Victoria where the demand is always greater than what we can provide.

I’ve found that remembering “If I'm saying yes to this, what am I saying no to?” has helped a lot. It's the question I always ask myself, when I'm booking in an extra patient or I'm replying to an email after hours.I used to encourage people to contact me anytime by email, and now I just respond at certain times.

I always think “what am I saying no to?” if I see an extra patient. It's usually sacrificing something of my own, like going to the gym or going for a walk or time with my family. And I'm just not prepared to do that anymore.

You've partnered with a friend for your retreats and upcoming podcasts, so I want to ask you about partnerships and why you've chosen to not go that alone?

Podcasting is something I've been thinking about for a long time. I think it's just such an amazing way to connect with more people to share your message to have bigger impact.

So at the Her Empire Builder retreat in Uluru, actually, Trisha Cashmere and I decided to collaborate. We just thought that together, we can bring so much more to this podcast. And I think it was less overwhelming for the two of us to commit to it! There's accountability around that, but I also think that beautiful conversation that we will naturally create having both had a similar path in terms of business ownership and health business ownership. It will bring different lenses to those conversations, and also a greater network for us.

What is the thing that you wish you knew at the beginning of your online course journey that could have been helpful?

Oh my gosh, there is so much!

I think the moment I joined Her Empire Builder, I realised that there is everything that I need right here. I'm an action taker, and I think that's why I was getting frustrated in the early days because I was ready to take action, but I actually don't know what to do next.

My big piece of advice is to find someone to help you and find a community that will support you. Because again, that's probably one of the most amazing parts of Her Empire Builder. The women that are all supporting each other asking questions and celebrating wins together, because it can be a lonely business being an entrepreneur.

Listen to our interview in full right here on the Her Empire Builder Podcast!