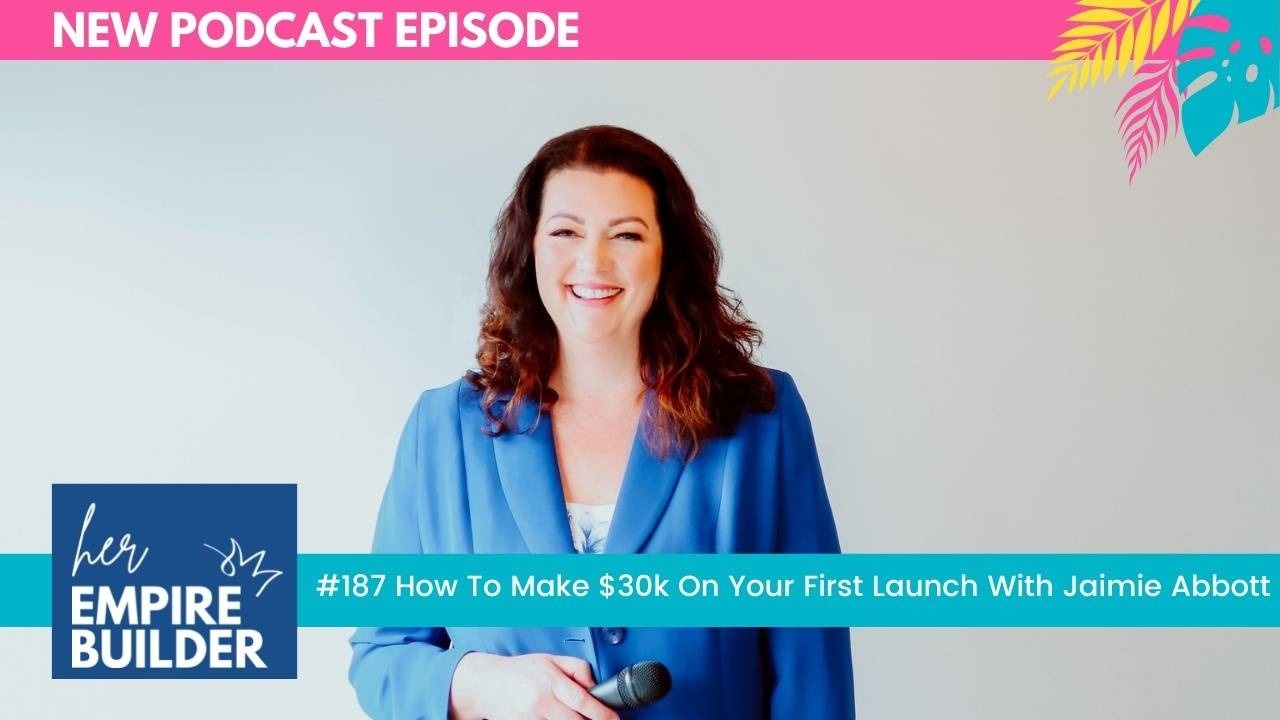 This week I had the pleasure of interviewing Jaimie Abbott - Professional Speaking Coach and Her Empire Builder member - who shared her story of how she went from politician and Officer in the Royal Australian Airforce, to a superstar course creator making $33,000 on her very first online course launch.

Jaimie is incredible and has worked her butt off in overcoming her fear and implementing all the things so she can reach her audience and get massive results for both her clients, and for her own business.

Keep reading to find out how she did it - or better yet, click here to join Jaimie and our community of epic course creators inside Her Empire Builder and start levelling up your business today!

Jaimie, how did you get started in online courses, and why?

It really started during the pandemic, like so many people. I got involved with watching Amy Porterfield videos and bought one of her courses. And then Marie Forleo. And as a user, I loved how you could just watch these Kajabi courses on an app. You could take it running, take it in the car, so I started seeking out course creators who were using Kajabi. That became a selling point for me if it was a topic I was interested in.

The user experience was so great that I got into it myself - I figured that if I love consuming this content, why not create some!

In 2021 I dabbled in creating my first online course which was a bit rough around the edge, sold it to a few of my friends and just kind of learned the ropes a little bit.

And then Tina Tower came into my world! I think I heard your podcast with Leonie Dawson, then I listened to your podcast and I just was drawn to you! From there I consumed your free content for a while, and then when I found out that you aim yourself at female course creators who use Kajabi, it was just talking to me, and I jumped into Her Empire Builder!

That’s when I put together my online course called ‘Paid To Speak’, which was teaching entrepreneurs how to become highly paid speakers.

I think that that real catalyst came last year in December. I was doing some speaking gigs here and there, and I was asked to speak. I could not fit it in before Christmas, so I said to them, “that'll be $30,000 for a whole day”. Because I just know they would say no. After 45 minutes and they said yes. So obviously I did fit it in for that price!

But it was an eye opener because I realised I've been undercharging all these years, and I've been telling my clients to undercharge. So that was kind of a milestone moment. I'd already dabbled in the course creation part of things, so I put together a course called Paid To Speak, teaching people how they could become highly paid speakers.

How much effort did you put into list building before your launch?

I've got a PR business background, and I treasured my email list. So I had a small list, and  half of it was probably inactive. I’ve got a much healthier list now because I've cleaned it out, as well as doing some Facebook ads and really concentrated marketing.

I've got about 6000 connections on LinkedIn, so I do two things.

Firstly, I send about 100 requests every week, and I target certain people - entrepreneurs, coaches, CEOs etc. When I send them the connection request, I always add a personal message where I tell them “This is what I do. This is my course.”  I was doing that in the lead-up to launch, and getting everyone to join the waitlist. I was also sending direct messages to my existing connections.

I had already been posting blogs and videos, so those people were familiar with my content already,. In many cases, all it needed was me to send them a direct message and they signed up.

How did you feel coming into that launch? Did you have any nerves around any part of it?

I found the tech side to be very easy, and it is because I literally followed your launch formula. You gave us all the templates on Canva and I just changed them around with my photos and my colours. With all of the emails that you gave us inside Her Empire Builder, I changed those into my own “Jaimie speak”. It was all locked and loaded and ready to go. So on the tech side, I felt really comfortable.

At times I did change some email or social media copy in the moment, because when you're in a launch, what goes through your head at the time may be different to what you've pre-written a month earlier. So I would jump on and I would change the emails to make it more pertinent based on questions that were coming in from people about the course.

If someone emailed me and said “Oh, I'm not ready yet to become a paid speaker” that would become the subject of the email that I would send out the next day.

What I was most nervous about was whether it was going to sell or not. It is the most roller-coaster ride of emotions I have ever gone on in my life - and I've spent six months in Afghanistan in the RAAF. I have been a journalist reading the news for three years in Tamworth and live on air to GB radio. I've been a politician. I've been a local councillor. I've done countless media interviews and jumped up on stage. But live launching was different - I couldn't sleep probably for a week leading up to it.

What do you think worked best for you in terms of your strategy and your offer?

One thing I also hadn't done before was reels. I had been listening to your podcast and consuming your content, then I started to watch your reels on Instagram. And I thought “I can do this”.

So I dabbled a bit. And I didn't like the educational ones or the ones where I face-planted, but I did it.

Because one of the things that you talk about, which I love is you’ve got to do “all the things”, and you do go that extra mile. I was sending personal Bonjoro videos to any leads that were coming in, to the point where some days I would be recording 20 A day of saying, “Hi, Tina, I noticed you downloaded my checklist. I've got my course launching now.”

But I realised that the thing that made the biggest difference was the personal connection, the personal touch. I would spend all day responding to direct messages and emailing people back and forward, doing lives, doing stories, going live on Streamyard, using LinkedIn and Facebook, putting out the emails, putting out the social media posts - I was doing it all!  And that's what worked.

I learned that you can't just rely on one thing. It’s about doing anything and everything I possibly could to get my course out there.

Listen to our interview in full right here on the Her Empire Builder Podcast!