Ep 191 - How To Build Your Dream Team with Veronica Romney 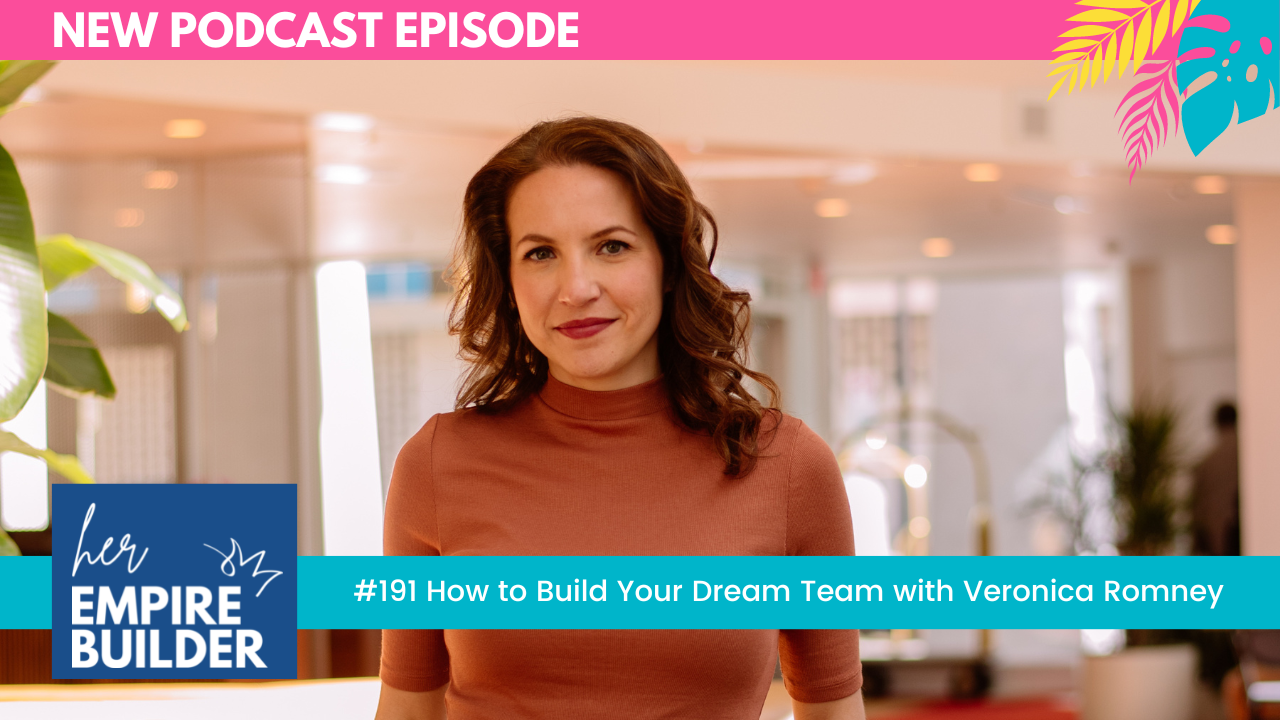 If you’ve been following along on social media, you have seen that at the moment I am doubling down on all things TEAM.

What I love about online business is it is so scalable and so leveraged. I’ve managed to build the business that I have on very little staff because I put so much effort into systems and automation (as well as doing a bit too much myself!)

To be honest, I’ve fought team expansion because I don’t like the weight of the responsibility, and I don’t like having to support people emotionally at the same time as trying to keep myself and my family all okay. To have responsibility over looking after other people is an added layer, and so I've got as big as I can on part-time staff.

But the time has come. I want to go bigger.

My mission to have 100 women making a million dollars a year by 2025. It’s a big bold goal, and I can't do it alone. And that’s where this week’s special guest, Veronica Romney comes into the picture.

Veronica is a real-life Dream Team Architect and an absolute rockstar when it comes to building a dream team and training rainmaking marketing leaders. No matter what stage you are at in your business - from solopreneur to 8-figure CEO - I know you're going to get valuable tips and insights from this gorgeous conversation with Veronica, including my 5 biggest takeaways below!

“If you talk to a visionary CEO that's just finished a launch, they're going to tell you that it was the worst experience of their life, regardless of their revenue outcome, because they had to do everything.

They're the ones that caught the broken sales link an hour after the sales pinch or sales page went live.

They feel the enormity of the pressure of being the talent and then also having to build up their own talent to be seen.

That’s why it's the marketing lane that is the most burned out churned out. CEOs need to shed that identity, because it was their marketing savvy that got them to the position of profitability and success.  And then they start hitting the ceiling. That 1 million, 2 million, $3 million ceiling. And they can't figure it out.

It's because you can't keep being your own CMO.

2/ Timing is everything when crafting your dream team

“Most visionary CEOs I work with are past the doer stage, and where I see a lot of people make mistakes is when they decide they are going to bring in a leader who is just going to take everything over. It ends up meaning that they are simply transferring burnout from CEO to next leader.

And when you, the CEO, are done being the only person generating ideas and thinking about making money for your company, then you know you're ready.”

“The best people I've ever managed have been with me for years, and that’s from developing within.

I can take an intern from the mailroom scenario all the way to the top because of time I’m investing in them.

So the first place to look is usually within the walls of the organization. Do you already have the rock star amongst your team? Do you have a rising star that if you just poured a little bit more into that flower pot, they would just blossom?

If there is no prospective rising star or candidate, then the second place I start is I usually ask for the referrals, and I am very selective. A players recommend A players. And so I go to the people that I know rock because I know that they are not going to recommend anybody who's not amazing.

If I can't source anybody within the walls of my company and there's no A player recommendations, the third greatest place I go to is to actually ask my own students, members, clients, or community, and I will help train and convert a walking testimonial into a rock star team member. They already know the product, the mission, the vision, the brand, and I just have to teach them how to rock their role.”

I'll be really honest with you, I don't really care about the company. It's not the LLC entity that matters to me and never will. I'm in business to provide a life for myself, for my family, and for the people that I feel like I'm meant to serve.

It's a means to an end, and what I care about is the end.

And I genuinely believe that people fundamentally inside of themselves want to do something that means something in the world.

One thing that I'm very adamant about doing as a visionary CEO is sharing the gold with the team. They need to hear the impact that we're making.

Otherwise it’s easy to get lost in the minutiae of the role and forget it's the minutiae that actually gets the result that changes somebody's life. And I personally want to employ people that want to change other people's lives as much as I do.”

“So it doesn't actually really matter what question you start out with. You could start with something so simple, like “Why do you love marketing?”

Like, literally any question, why do you love marketing?

Then what you do is the “seven levels deep exercise” where you ask the generic question. Then,  whatever the generic answer is, you frame it in the second question.

For example, if you ask Why do you love marketing? the response might be I just love how creative it is, and I love how exciting it is, and it's always changing.

Then your next question would be Why do you like being in an environment that's always changing and that it's important for you to be in a creative space?

You basically take the answer from the first question, frame it in a second question, and I keep going until I really get to the real answer of why they actually like marketing, or actually why thy want to be here.”