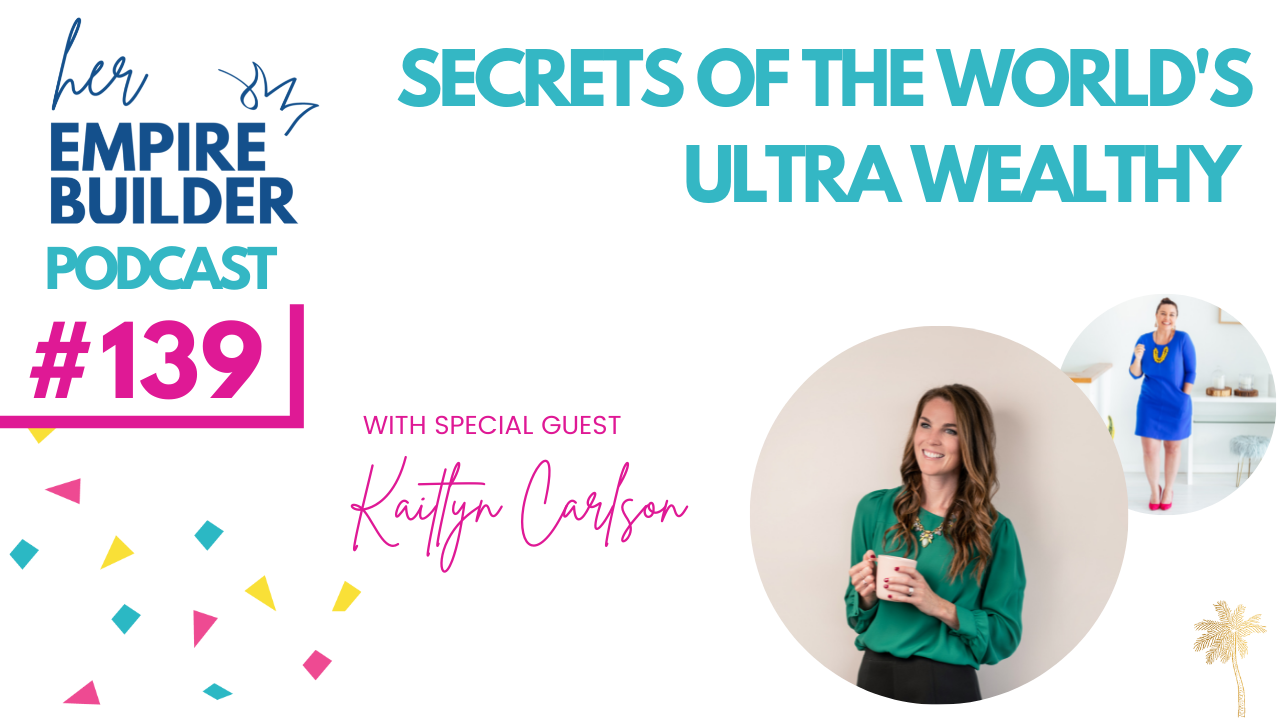 Wealthy women change the world. It's something that we know to be true. And we are doing our best to be able to change the balance of wealth to make it so much more equitable, so that women are controlling more wealth in the world and are able to do the things that they want to be able to do with it.

My guest on Episode 139 of the Her Empire Builder podcast today is Kaitlyn Carlson. Kaitlyn is someone that I met at a millionaire mixer - a wonderful little zoom meeting of self made millionaire women to share their stories, and their wealth and their tips. To be ableto have conversations openly about wealth and decisions around it was so incredible, and made me think how much these people are just going for it! So often, we can exist inside our little bubbles so easily and get trapped in not thinking big enough! I also thought how much these conversations don't happen in normal life, and money is still such a taboo subject for so many people. I wanted to have Kaitlyn on to share the secrets of the the world's ultra wealthy and how you can implement them into your own business and life.

Kaitlyn is sharing the story of how she started out in a very traditional financial advisory firm, and then basically got pushed out with a whole heap of sexual harassment and awful stuff, and decided to go out on her own. It ended up being the best thing that ever happened because now she is kicking ass and helping women across the globe be able to create, maintain and build their wealth. So we're talking about when to start building wealth, when to be conscious of it, the common mistakes that she sees, the mindset that you need to work on and everything in between.

Kaitlyn is the founder and CEO of Theory Planning partners, a concierge financial advisory firm designed for seven figure female entrepreneurs. Before launching Theory Planning, Kaitlyn spent the majority of her career at UBS financial services where she held roles in the south as well as the northeast of the US. There, she developed more than 300 financial plans for clients with assets ranging from 500,000 to a billion dollars. Subsequently, she became an advisor on a private wealth management team that managed over $600 million for just a few dozen families. Her career began in Asset Management with Putnam Investments. She's a certified financial planner, a certified exit planning advisor, and an accredited Wealth Management advisor.

Kaitlyn is such an incredibly smart and down to earth woman, who has created this life that she's able to deliver massive value and serve the world in the way that her soul was calling for it. She's sharing so much value with you in the episode and my hope for you is to be able to take something from this episode, and take your future more seriously. It’s so incredibly important to understand the importance of your money, and the effect of having money makes more money.

Once you start understanding money, and how you can make it work for you, you will begin to start making more financially healthy decisions to better your business and also to safeguard your future. In the episode, Kaitlyn explains that ultra wealthy people make different decisions with money and it’s a mindset game, that if you can master early on, even when you’re just starting out in business, it will have a huge impact on your future.

Keen to know more? Listen to the Episode at tinatower.com/139